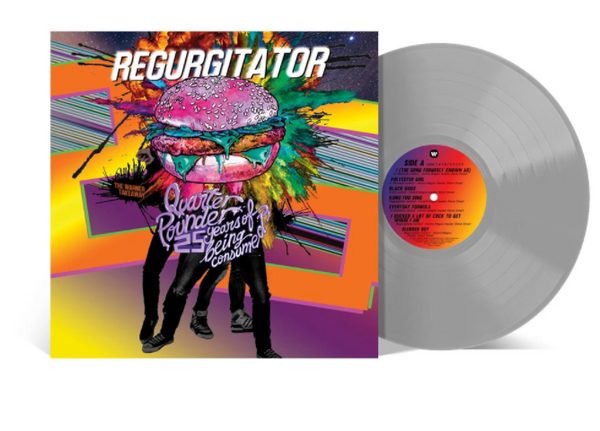 A perfect meal deal for those who like their old stuff better than their new stuff, Regurgitator celebrate their 25th anniversary with the new compilation Quarter Pounder - 25 Years Of Being Consumed. Set to be available as a 13-track silver vinyl edition and 19-track CD and digital title, Quarter Pounder showcases Regurgitator’s magnetic appeal, an unlikely musical fusion as indebted to the live vitality of Black Flag as the synth hooks of The Cars.

Emerging from Brisbane in the mid-‘90s as alternative music edged into the mainstream, the ‘Gurge’ quickly established themselves as a surreal staple on both radio and the touring circuit. As well as surviving six Big Day Out tours, Regurgitator also gave touring partners such as Red Hot Chili Peppers, Helmet and The Prodigy a run for their money when it came to winning crowds over with sweaty, energetic, genre-bending rock.

Unleashed in 1996 and including lead single Kung Foo Sing and I Sucked A Lot Of Cock To Get Where I Am, debut album Tu-Plang won ARIA Awards for Best Debut Album and Best Alternative Release. Barely pausing to take stock, guitarist Quan Yeomans, bassist Ben Ely and drummer Martin Lee reconvened in a condemned warehouse in Fortitude Valley to record second album Unit. Despite Yeomans later suggesting the 1997 album was “poorly put together and amateurish”, it was a zeitgeist moment: sold-out tours, triple platinum sales and five ARIA Award wins (including Album Of The Year, Best Adult Alternative Album and Best Cover Art) for Unit were just a few of the obvious signs the band had been embraced by the public and critics alike.

More beloved Regurgitator singles followed as we survived Y2K paranoia and ticked into a new century, including Happiness, Superstraight and Fat Cop, which appeared in the 2001 Triple J Hottest 100 at number 27 – just one of the 13 appearances Regurgitator have made in the annual countdown since 1995.

Injected with subversive, self-deprecating humour and an abundance of clever melodies, the new Quarter Pounder - 25 Years Of Being Consumed collection showcases Regurgitator’s fiercely unique and musically charismatic position in the Australian music scene. Taking in almost 20 dates across Australia, Regurgitator’s upcoming Quarter Pounder Tour – 25 Years Of Being Consumed will offer fans a chance to hear the Gurge belt out these Aussie alternative classics live once again.

The Runaways ‎– The Best Of. (Vinyl, LP, Compilation)